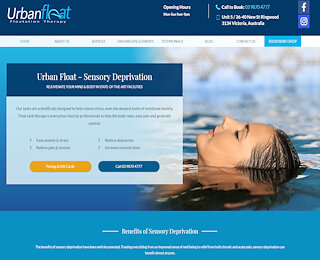 An Urban Float is a therapy in which users are placed in a pod of a supersaturated solution of water and Epson salt. The huge quantity of Magnesium Sulphate creates buoyancy, allowing users to float effortlessly, free from fighting gravity, and creating a deep sense of relaxation for the body and mind.

The temperature of the air and water in the pod is at skin temperature, allowing the body, after a few minutes, to lose awareness of where the body ends and where the water and air starts. The environment restricts noise from the outside from reaching users.

Urban Float comes with tremendous health benefits, below are some of them:

It has been estimated that the bulk of activity that affects the Central Nervous System is related to gravity. Our brains are constantly at work trying to balance our position and are affected by gravity. Dedicating so much attention to the effect of gravity, our sensitivity and awareness of internal and external reality are decreased. An urban float reduces this gravity-related tension thereby intensifying our awareness and sensation of other stimuli. The urban float allows the muscles to relax totally thereby improving blood flow to every area of the body. This aids the activity of the heart, allowing it to function more efficiently with less effort.

Scientists have been able to pinpoint the specific wave frequencies that are induced in the brain during periods of tranquility associated with deep meditation. A Recent study of the Float therapy has also revealed that Urban float is able to induce the same wave frequencies in the brain that is achieved after years of meditation session in experienced monks. Floatation induces the alpha and theta wave pattern in the brain.

Effect on the right and left hemispheres:

The left hemisphere is the seat of analytic thinking, while the right processes information in nonverbal, intuitive and imagistic manner. It is the seat of creativity.

Studying the EEG results of floaters, it reveals that floating increases right brain functions. During a float, the capacity of the left hemisphere of the brain is somewhat reduced, while that for the right is increased, thereby changing the roles from that of dominance/recessive to that of equal partnership. The two hemispheres essentially work together in equal capacity. Floaters, therefore, can use all of their mental powers. In practical terms, there is an increase in productivity, efficiency, and performance in floaters.

Floating has been proven to lower the level of stress hormones in the body. Hormones such as epinephrine, norepinephrine, cortisol etc. It has been shown that floaters are able to influence the chemical secretions in the brain, thereby positively influencing their behaviors, mood, and emotions.